Van der Wekken has been a loyal Kraker client for many years. The company bought its first Kraker moving floor trailer in 1998, and recently the sixth one was delivered, with ARC-controlled trailing axle. Kraker Trailers provides steered trailers under the K-Force X1 brand name. 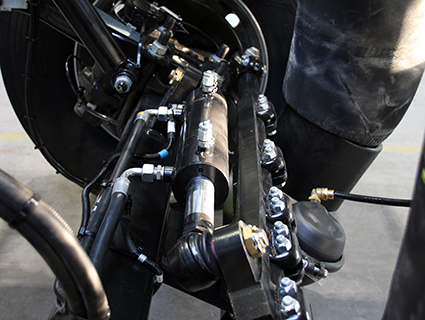 Johan van der Wekken has a good relationship with Jan de Kraker, or as he puts it, "we are both typical Zeelanders," which is something that anyone from Zeeland can associate with. But that is not the only reason why Johan has been buying from Kraker for years. For him, direct contact is very important and in his experience, the opinion of the customers is really important. "Kraker is always open to improvement wherever possible and the company responds proactively when you make a suggestion," said Johan. Johan believes that Kraker Trailers truly are the Masters in Moving Floor Trailers.

What makes the ARC system so special?

A trailing axle is an axle that automatically 'steers' (as the name suggests) as the final axle enters a bend. This happens because the pivot point is in front of the axle, while the friction does the rest. This is an excellent system which also significantly reduces tyre wear. Problems arise when reversing, however, because then the pivot point is exactly on the wrong side, which causes the trailing axle to work against itself. A 'normal' trailing axle is therefore equipped with a lock when reversing. The ARC (Active Reverse Control) is an electro-hydraulic steering system that has been specifically developed for trailing axles to automatically steer the trailing axle when reversing. It is possible to make steering adjustments using the wireless remote control.

A trailing axle always carries a little more weight and provides a little less volume (92m3 versus 93m3), but in Johan's opinion the convenience and savings on tyre wear more than compensate for that.

All in all, Johan van der Wekken has a K-Force that can be better steered due to the ARC-controlled trailing axle, and which provides more manoeuvrability, even when reversing on farm yards and other tight spaces that Van der Wekken frequently has to deal with.
With this specific Kraker trailer, Van der Wekken has expanded his fleet with nearly another 14 metres of flexibility, multifunctionality and manoeuvrability. And that is the power of Kraker's K-Force.